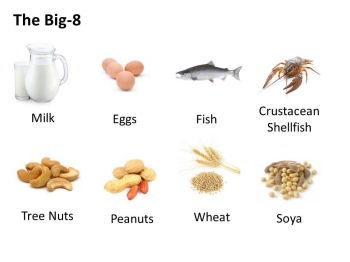 Food allergies have become an important topic in recent years for a multitude of reasons. Their incidence has been on the rise, affecting 30% of adults and 40% of children. People can be allergic to just about anything but there are 8 allergens which are most common.

What is an allergy?

When your body is exposed to an irritant (known as an allergen), such as pollen, it launches an attack against it. Most of the time when this happens, we don’t even notice it. Sometimes, if there’s an overabundance of the allergen or your body is especially sensitive to it, this immune response shifts into overdrive. Your eyes water, your nosy gets stuffy, or you break out in an itchy rash. Some allergens cause life-threatening reactions, such as anaphylaxis, which leads to a sudden drop in blood pressure and a narrowing of breathing airways.

Foods can also act as allergens. When someone is allergic to a food, they can’t eat it at all. Some allergies are so severe that people can’t even be near the irritant, as breathing it in or touching it could cause anaphylaxis. An allergy is different than a food sensitivity or intolerance. Intolerances, such as the inability to digest milk (lactose intolerance) are not typically life-threatening, although they will cause discomfort, such as bloating and diarrhea, if ingested.

The Big 8 are the cause of 90% of recorded allergies and labeling is required by the FDA to warn consumers of their presence or possible presence in foods.

1. Peanuts: Peanuts are actually legumes, which as a group are responsible for a large number of allergic reactions. People allergic to peanuts are not likely to be allergic to other legumes, such as lentils. Children are more likely to develop a peanut allergy if they already have an egg allergy.

3. Fish: Pollock, salmon, cod, tuna, mackerel, and snapper are among the fish which commonly trigger fish allergies. The allergen in this group is the fish muscle protein parvalbumin. These allergies are often developed during adulthood and are less likely to be outgrown.

4. Milk: Milk allergy is the most common allergy in infants and young children. A milk allergy causes an immune response to the proteins in milk. All milks, including those from cows, goats, and sheep can pose a problem. Most children outgrow their milk allergy.

5. Eggs: Also common in children, both the yolk and the whites of eggs can trigger a reaction, but in some cases the egg yolk is less allergenic. Eggs are not only used in foods, but also in skincare products and cosmetics which contain eggs. Most children will outgrow their egg allergy.

6. Soy: Also in the legume family, soy is an allergy that kids are likely to outgrow. Here in the United States, soy is most often found in processed foods, either as soybean oil or soy protein isolate. People with soy allergies may be able to have soy lecithin without issue.

8. Tree nuts: One of the most potent and common allergens, tree nut allergies affect 1.1% of the world’s population. Those affected by the tree nut allergy should avoid macadamia nuts, Brazil nuts, cashews, almonds, walnuts, pecans, pistachios, chestnuts, hazelnuts, and pine nuts. The reactions associated with tree nuts are often severe, with walnuts and cashews causing the most reactions. At least 90% of children that have a tree nut allergy will not outgrow it.

Accuracy in food labeling is critical for people with allergies, but it’s not as easy to be sure when dining out. Don’t be afraid to ask your server or the chef what’s in the dishes, including any allergens the foods may have come in contact with. It’s in your best interest to enjoy your meal safely!