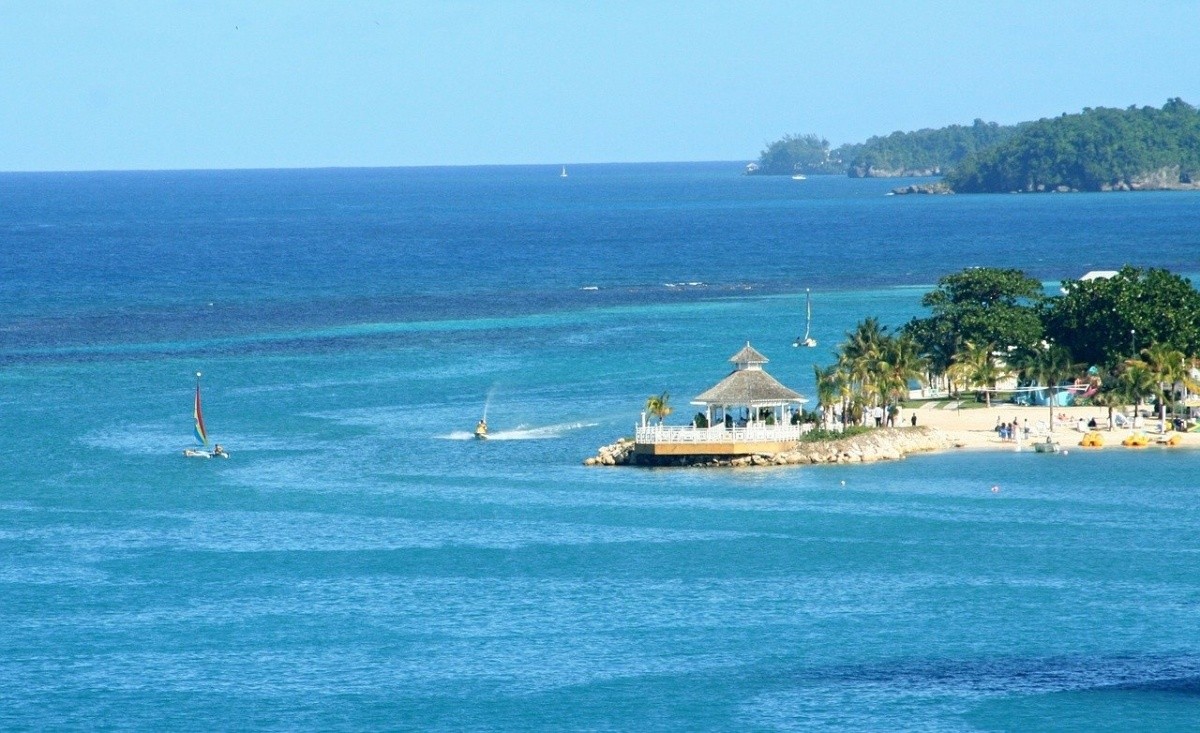 only 15 minutes from shore,

boats and scenic views add up

to a quality fishing experience

have a chance at landing blue

tuna and dolphin (dorado) in

deep water that drops to thousands

of feet beyond the reefs.

Blue marlin is the mostprized

catching your first marlin in

Jamaica is well within reach.

conditions of one to two knots

of consistent current which

to form “weed lines”- these

are every offshore angler’s

trees and other debris to drift

out to sea. This floating matter

from the sun, which in turn

ecosystems exist under these

weed lines which can spread

out for miles and contain all

manner of sea life, including

During the summer months

when the wind is fairly calm

and the sea is relatively flat

the weed lines get bigger,

marine activity beneath the

On the south coast there are

quite a number of banks and

cays where you can find a

The largest bank along the

south coast is the Pedro Bank.

This bank is home to a variety

of fish such as yellowtail, mutton

and red tail snapper as

well as grouper and shellfish.

Fishing for wahoo and kingfish

is excellent along the

south coast due to the presence

of these banks. The

North coast also has quite a

few banks and the three main

banks located off the coast of

Shipwreck. There is also a

off the coast of Montego Bay

Strictly speaking there are

certain periods of the year

when different species of fish

are more common. The dolphin

from January through April,

the black fin and yellow fin

tuna season run from April to

August and the core marlin

season runs from August to

December. Despite this, you

will find that it is quite common

for any of these species to

be caught in Jamaica’s waters

So if you are in Jamaica right

fishing. Charter boats can be

booked for full-day or half-day

trips in most resort areas (see

but be sure to enquire about

whether beverages are included

and who keeps the catch.

Mounting of prize fish is available

and some boats will

arrange to have a fish cleaned

and even cooked to order.

A day of fishing in Jamaica is

about more than just lines,

bait and fighting marlin. It is a

beauty and coastline from

offshore aboard a comfortable

sportfisher with a professional

crew that will ensure that

whether you catch the “bigone”

or not you have a wonderful

some music, enjoy some

refreshments and keep an eye

out for porpoises and sea turtles

mangrove forests of Jamaica are home to many popular species

of game fish including tarpon, snook and barracuda.

charters led by experienced guides. Most fish species are available

including river, inshore and deepsea habitats, as well as technical

the Cayman Trench that extends from the Windward Passage at

the southeastern tip of Cuba toward Guatemala. At about half a

mile off the coast of Montego Bay, the drop off begins, starting

to west-southwest and has a maximum depth of 25,216 feet

the abyss to make the waters uncommonly rich for tropical

Billfish Tournament, usually held in October, is one of the most

celebrated and prestigious in the Caribbean. Each year this

event attracts up to 50 boats, including anglers from the U.S.A.

and neighboring Caribbean islands. Other tournaments are held