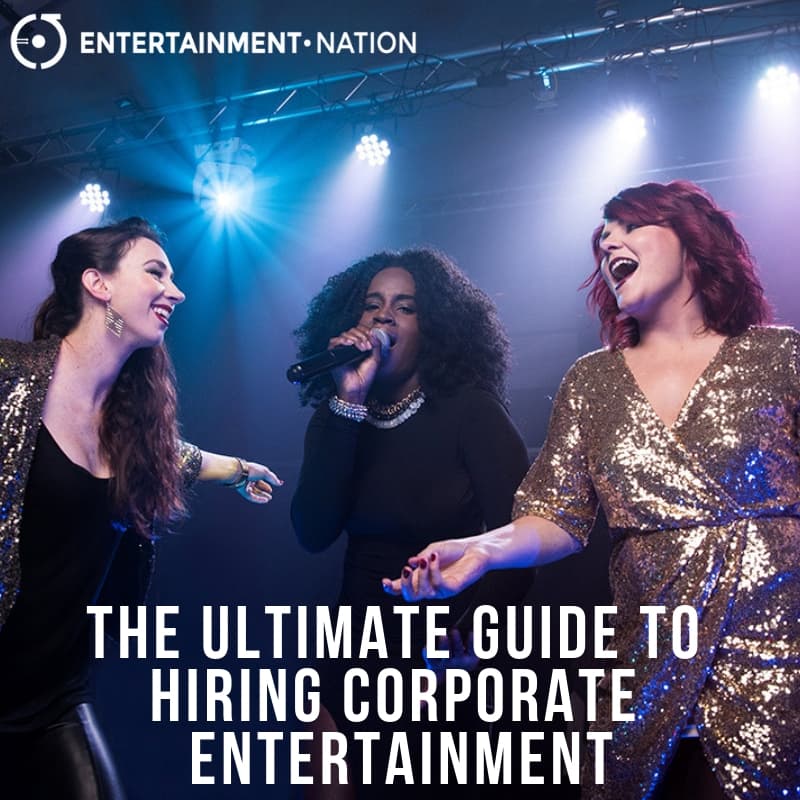 A Word About Agents

In the article ‘How to Plan a Banquet,’ we included a limited discussion about entertainment, and our basic advice was to hire a competent talent agent who specializes in “casuals,” which means one-day or one-night events, such as parties, weddings, Bar and Bat Mitzvahs and other

Some agents represent actors and actresses, and unless they have a department that handles variety acts and bands, they would be of no help to you.

Some other agents handle only major attractions and celebrities, and unless you’re working with a serious budget, they won’t be able to help you get a band for Aunt Sarah’s 50th anniversary party.

A variety agent is able to help you get that close-up magician, band, and sometimes even name entertainers like Reba McEntire or The Temptations. Those that specialize in variety entertainment are sometimes called “full-service” agencies.

How do you tell who is a competent agent? That’s a good question, because if you asked an agent if he’s competent he’d be a fool to say anything but “Of course!”

Having been in the entertainment business for over forty years, I’ve seen a lot of people set up shop as agents. Some last, some don’t.

Finding your own entertainment can be fun. I have spent years watching other acts, bands and attractions, and I never fail to enjoy it.

The internet or the Yellow Pages are a good starting place. Try using a search engine to find what you’re looking for. You’ll find listings in the Yellow Pages under entertainers, party planners, entertainment bureaus, and maybe some other categories.

Try a search for something like “bands in los angeles” or “juggler orange county” or whatever is appropriate. See what you come up with.

Beware that a beautiful website may not mean the best entertainer. Many website are not built by the entertainer and even it is, a nice-looking website does not translate to great entertainment.

Watch your local newspaper for entertainers that are scheduled to appear for other groups in your area, and make it a point to catch their acts if possible. Of course, if you start going to other events, you’ll see some poor entertainment, too. (I guess it holds true that you have to kiss a lot of frogs to find a prince!) But even that can be helpful, if you are observant and make a note of what made the act good or bad.

If you’re not working with an agent, you will need to review the act yourself. There are three methods of reviewing an act: You can (1) go see the act perform live, (2) watch a video of the act, or (3) have the act come audition for you.

By far the best way is to see the act perform under roughly the same set of circumstances as your event. Seeing people perform in Las Vegas to a night-club crowd does not mean they’ll be able to perform for little Gloria’s 10th birthday party (or vice versa).

The problem with going to see live performances is that it is certainly very time consuming, and you will only be able to see a limited number of contenders before it’s time to make a decision. But on the other hand, think of the fun you’ll have!

Watching DVDs is an excellent method, as you can cover a lot of ground in an evening. Unfortunately, not all acts have DVDs or videos, and it would be a shame to eliminate a topnotch act just because they could not supply one.

Another BIG problem with video is that many acts supply a short, edited version of their act. This can be very deceptive. When reviewing an act by video, I always insist on (but don’t always get) an unedited version of the show. I never hire an act based on an edited video. I’ve heard of instances where an act was hired because they had a very powerful video, only to find that in their entire show, the only part that was any good was those few minutes on the video.

Don’t be overly impressed by a DVD or video of a movie appearance, guest spot on a TV show, or commercial. That still does not mean they can do the job you want them for.

Unless you’re an agent, you can just about forget about having the act audition for you. Maybe an act will drop off literature. In the case of a magician, mime, or similar variety act, you may receive a short demonstration. However, this small segment along with its glib pitch can be very deceiving.

Don’t take chances; be sure of what you’re buying!

When you talk to an entertainer on the phone, ask him to send his “press kit” or literature and a DVD or video tape.

Most variety acts will have printed literature or a complete press kit (which includes a photo, biographical information, letters of recommendation and references or list of past performances).

Please don’t be taken in by good printed material. Usually, but not always, you can get a pretty good idea of their level of professionalism by the materials they send you.

I do know some really great acts that work all the time and have virtually nothing in the way of printed materials. Of course I’ve also seen some really outstanding printed materials but was disappointed when I saw the act. I have a band that I send out to a lot of small weddings and installation banquets, and it took me almost a year to get a photo from them. (I’m still hoping to get a song list some day.) I’ve got another band that is absolutely tops in promotional material and their band is absolutely tops, too!

Some performers no longer use paper press kits but instead prefer an electronic press kit either contained on a DVD they send you or simply up on their website. That’s fine. It’s certainly a more contemporary method of promoting one’s self.

It’s important, once you’ve decided what entertainers or band you’re going to hire, that arrangements be made clearly and in writing. I’ve enclosed a sample letter you may wish to use. Some entertainers have their own contracts, but many do not, making it necessary for you to put everything down on paper and send it to the entertainer. I’m not a lawyer so I don’t know how enforceable the letter is, but at least you have the information down on paper and you both understand and agree to the terms.

If I’m serving as Agent, I fill out a contract based on our conversations, and then forward it to my client for a signature. I try to collect as much information as I can about the event so that I can prevent any surprises. The entertainers also receive a binding contract.

By the way, this might be a good place to mention that talent agents are like travel agents in that they don’t charge you for their services, but instead charge the entertainers. The agent is really looking out for your interests and can draw from countless entertainers and bands, being reasonably familiar with what each act does. There is an internet subscription service that lists thousands of entertainers, who their personal manager is (if any), and/or how to reach them. All entertainers are available to a full-service agent, rather than just a handful of acts that the agent has been able to put together.

When making your arrangements with entertainers make sure that you discuss everything:

There are plenty of things to inquire about. Take time to picture in your mind exactly how things will be. If there is a question in your mind about anything, ask. Ask the hotel, the band, the act, the agent.

Well, really, that was easy. Just spend months looking at acts and days negotiating and a few weeks wondering if you blew it. (Or give a call to a competent talent agent and let him worry about the hard stuff!)

Perhaps a good rule to remember is “You get what you pay for.” A friend called me and wanted Mariachis for a Church Mexican Fiesta. I quoted him a price for five Mariachis for two hours, but he went out and hired his own for less. He called me up later just sick about it. He had called a group advertised somewhere and got a low price…and low quality. It’s not a new story.

Don’t look for the lowest price; look for quality. If you can’t afford top quality, it’s probably better not to have entertainment at all rather than to hire an act that makes you and everyone else squirm in their seats.

Makers Of The Unbreakable Widget

This is to confirm our arrangements for you to entertain at our annual installation banquet to be held October 32, 2009 at the Rancho Cucamonga Holiday Hotel, 2345 Hotel Ave., Cucamonga,

The banquet will begin with the cocktail hour from 6:00pm to 7:00pm at which time we will sit down for dinner. We would be delighted if you would join us. Please let us know if you would prefer the fish or the steak.

We have a deejay who will provide you with a microphone on a microphone stand and the hotel has arranged to put up a 8′ wide by 6′ deep by 2′ high platform, with stairs at one end, for you to perform on. Your 30 minute performance of comedy and magic should begin after dinner, approximately 8:15pm. I will have a $750 check ready for you at the conclusion of your performance. Please also bring me your parking ticket for full validation.

Please sign a copy of this letter and return to me to solidify our arrangements.

From: Freddy The Magic Man

Helping to improve life through investing

Thank you for agreeing to have your 8-piece band play for my daughter’s wedding on July 14, 2008 at the Forrest Glen Country Club, 2323 Country Club Drive, Lancing, Ohio from 8:00pm to midnight. As we discussed, the band is to complete their set-up by 6:00pm and you will play recorded music through your sound system from 6:00pm to 8:00pm for the cocktail hour and dinner.

You also agreed to act as the emcee introducing the bride and groom and the entire wedding party as they enter the room at approximately 6:30pm. I will e-mail you the line-up at least a week before the event. Please kick off the dance set at 8:00pm with the Father /Daughter dance “Isn’t She Lovely” and then invite the entire wedding party to join them on the dance floor at the end of that song and play “Celebration.”

I understand that the band will play four 45-minute sets each hour and you will provide recorded music during your breaks. I will have a check for $2,450 ready for you when you arrive. I will also obtain full validation for all of your musicians if you will collect their parking slips. I will have sandwiches, sodas, coffee, iced tea and fruit juice in the break room at 7:00pm for you and the band. Please check in with Diane at the Country Club and she will show you the break room.

Please sign below and return a copy of this letter to make sure we’re on the same page.

Everything is as agreed. We will be there.