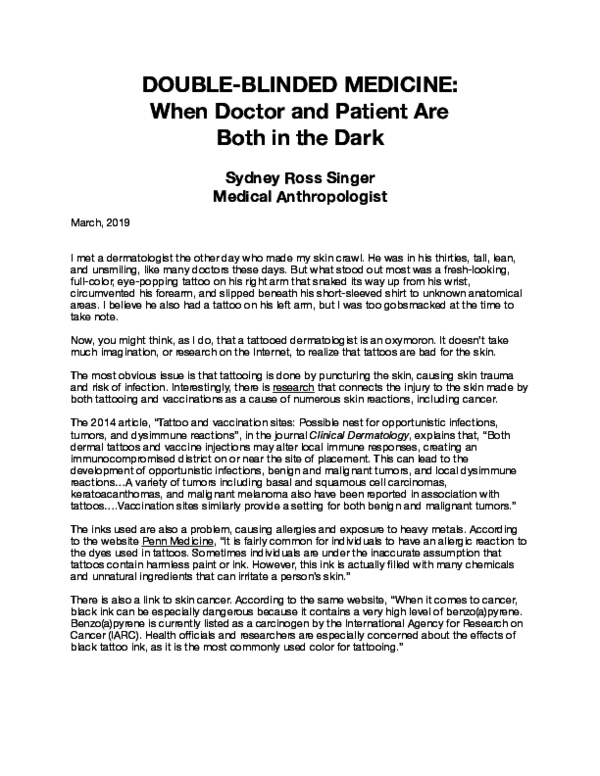 When Doctor and Patient Are

Both in the Dark

I met a dermatologist the other day who made my skin crawl. He was in his thirties, tall, lean, and unsmiling, like many doctors these days. But what stood out most was a fresh-looking, full-color, eye-popping tattoo on his right arm that snaked its way up from his wrist, circumvented his forearm, and slipped beneath his short-sleeved shirt to unknown anatomical areas. I believe he also had a tattoo on his left arm, but I was too gobsmacked at the time to take note.

Now, you might think, as I do, that a tattooed dermatologist is an oxymoron. It doesn’t take much imagination, or research on the Internet, to realize that tattoos are bad for the skin.

The most obvious issue is that tattooing is done by puncturing the skin, causing skin trauma and risk of infection. Interestingly, there is research that connects the injury to the skin made by both tattooing and vaccinations as a cause of numerous skin reactions, including cancer.

The 2014 article, “Tattoo and vaccination sites: Possible nest for opportunistic infections, tumors, and dysimmune reactions”, in the journal Clinical Dermatology, explains that, “Both dermal tattoos and vaccine injections may alter local immune responses, creating an immunocompromised district on or near the site of placement. This can lead to the development of opportunistic infections, benign and malignant tumors, and local dysimmune reactions… A variety of tumors including basal and squamous cell carcinomas, keratoacanthomas, and malignant melanoma also have been reported in association with tattoos… Vaccination sites similarly provide a setting for both benign and malignant tumors.”

The inks used are also a problem, causing allergies and exposure to heavy metals. It is fairly common for individuals to have an allergic reaction to the dyes used in tattoos. Ink is actually filled with many chemicals and unnatural ingredients that can irritate a person’s skin.

There is also a link to skin cancer. When it comes to cancer, black ink can be especially dangerous because it contains a very high level of benzo(a)pyrene. Benzo(a)pyrene is currently listed as a carcinogen by the International Agency for Research on Cancer (IARC). Black ink is the most commonly used color for tattooing.

You might think that this doctor may have gotten his tattoos before becoming a doctor, so he didn’t know any better. But this was a new tattoo. And he was flaunting it, not hiding it.

Tattoos are common these days, and fashionable in certain circles. Doctors want to look cool, like everyone else. They grew up like everyone else, exposed to, and brainwashed by, the same cultural messages. They just choose to go into medicine.

I also met a cardiologist who smoked cigarettes. He was also grossly overweight, and ate a big, juicy hamburger with fries for lunch. Of course, being obese, smoking and eating fried foods can increase heart disease.

An obese, smoking cardiologist eating fast food makes as much sense as a tattooed dermatologist.

Maybe these doctors are attracted to their specialties because they know they will need treatment from that specialty due to their lifestyles? It’s like when mentally-disturbed, neurotic people become psychologists or psychiatrists.

How about female doctors who constrict their breasts with tight bras for long hours daily? There are many female breast health experts, including breast surgeons, who wear breast-harming bras. Their medical training never mentioned tight clothing as a cause of circulatory impairment and lymph stasis. These doctors willingly immobilize and alter their breast shape, hide their nipples, and basically re-design their breast appearance for cultural reasons, and do this despite the documented harms caused by bras, including causing breast pain, cysts, and cancer. Wearing bras is just something every woman is culturally expected to do, even doctors.

Is this hypocrisy? Should we expect doctors to be paragons of health and healthy lifestyles?

More basically, when we seek help, does it matter whether the helper is in the same mess we are in? In other words, can you trust a lifeline from someone in the same boat as you?

We seek help in many places.

Would you go to a priest who was a known pedophile?

Would you use a mechanic whose car is broken down?

Would you go to a hairdresser who is having a “bad hair day”?

Would you use a plastic surgeon who has a big nose, cock-eyed chin, and facial scars?

How about eating in a restaurant where the cook is out because of food poisoning?

You could also go into a health food store and buy chips, coffee, candy, wine, beer, and lots of other unhealthy stuff.

Then there are the drug addiction recovery programs that offer coffee to everyone, one of the most addictive substances we consume.

Clearly, there’s a problem here. We live in a culture where there are lots of products and activities that can harm us. In fact, the biggest cause of disease and death is the culture and all the bad things it teaches us to think, do and feel. We absorb these cultural messages from the uterus onward, as our nature becomes modified by our culture.

This applies to everyone. It includes doctors, too. Just because someone studied medicine, it does not mean that they personally eliminated all harmful cultural practices in their lives. The same cultural causes of disease that fill their waiting rooms also fill their personal lives. In fact, the medical culture is even worse on doctors.

For some reason that is not clear, the medical system exploits doctors with long work hours and sleepless day and night shifts. Doctors are rushed and pressured, grabbing unhealthy snacks on the go. They become tempted to abuse drugs to keep going, but may settle for drinking 10-20 cups of strong coffee, instead. They also become tempted to use drugs to relax, but may settle for a few alcoholic drinks. They have little recreation time, or time with their families. And depending on their specialty, they are exposed daily to infectious diseases, death, radiation, the soul-robbing sights and smells of hospitals, and the depression of treating endless lines of sick people, often using treatments that do no good, and for conditions that have no known cause.

Clearly, being a doctor can make you sick, mentally and physically. No wonder why there are so many doctor suicides. Just practicing medicine is slow suicide.

This also means that doctors are not the ones to tell patients to clean up their lifestyles. The doctor’s lifestyle is at least as bad, and actually worse. They participate in the same unhealthy culture as everyone else, addicted to many of the same things, and suffering from the same psychological and physical issues. But they are the ones who are meant to treat those problems.

This is a basic reason why medicine does not emphasize lifestyle or other cultural causes of disease. How can doctors tell patients to not do things that they themselves do?

This is also why many discoveries of the cultural causes of disease are left unnoticed by medicine. For example, when smoking was culturally accepted as safe and good for you, everyone smoked, including doctors. In the 1950’s, there were ads by tobacco companies using doctors to promote smoking. New research that showed smoking caused lung cancer was ignored, ridiculed, and opposed vehemently by many in the medical profession.

Nobody likes to be told that what they are doing is wrong and can harm them, especially doctors who are regarded as the experts on health. Telling smoking doctors that their habit is actually bad is a challenge to their authority. And how can they tell smoking patients to stop?

Another example can be found in today’s debate over the health hazards of bras and their link to breast cancer. I know about this issue personally, as the co-researcher, with my wife Soma Grismaijer, of the world’s first study focused on the bra-cancer link. We announced our results in the 1995 book, Dressed to Kill: The Link Between Breast Cancer and Bras, now updated for 2018.

There are now many studies internationally which link breast cancer with the wearing of tight bras.

Essentially, bra-free women have about the same risk of breast cancer as men, while the tighter and longer the bra is worn the higher the risk rises, to over 100 times higher for a 24/7 bra user compared to a bra-free woman.

But this information is still being resisted by a culture which has become as addicted to bras as it had been to cigarettes. Women have become conditioned into believing that they need artificially-shaped breasts to be acceptable in public. Even doctors have bought into that message. Under the spell of the lingerie industry, the thought of being bra-free in public sends a chill down the backs of women who would feel naked and ashamed without their breasts being bound by a bra.

As a result, the bra issue is still relegated to alternative health and fringe groups, although women are now asking why they need to wear bras in the post-#MeToo world. Must women’s breasts be constantly sexualized by pushing, squeezing, prodding, pinching, compressing, constricting, cleavaging, and lifting their breasts with bras? Many women are now saying no.

Ironically, many female doctors who use bras are insisting that under no circumstances can bras cause disease, especially cancer. The reason is that they cannot imagine themselves being bra-free at work, which is a logical conclusion of this information. If they realized that bras were causing disease, then they would have to defend their bra habit.

This means that there is an additional problem caused by doctors being as ignorant as everyone else with regards to unhealthy lifestyles. Not only does the bad-lifestyle doctor model bad lifestyles, but that doctor may also be personally and psychologically invested in defending those bad lifestyles. They don’t want to stop doing what everyone else is also doing. They want to belong, just like everyone else, even if that requires smoking, drinking, or doing other harmful behaviors.

But their denial carries weight with patients. Doctors model and teach implicitly by their own behaviors.

Should doctors be required to practice the latest lifestyle trend alleged to improve health and prevent disease? Before anything like this can even be considered, the bigger obstacle for doctors is their own medical culture that abuses them and drives them to depression and suicide. So long as the institutional and corporate powers that control medicine continue to abuse doctors with a harmful medical culture, don’t expect medicine to focus on culture.

Medical culture is a glass house that will not throw stones at pop culture.

And since the medical industry profits from the detection and treatment of the resulting diseases, there is actually financial incentive to maintain the cultural status quo, even if that culture is also killing doctors. There are many more pre-med students waiting to take their place.

This is double-blind medicine. Both the patient and doctor are in the dark. It’s the blind leading the blind, except that the blind leaders deny their blindness and scoff at those who see the light.